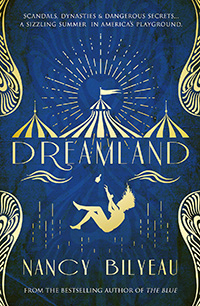 The year is 1911 when twenty-year-old heiress Peggy Batternberg is invited to spend the summer in America’s Playground.

The invitation to the luxurious Oriental Hotel a mile from Coney Island is unwelcome. Despite hailing from one of America’s richest families, Peggy would much rather spend the summer working at the Moonrise Bookstore than keeping up appearances with New York City socialites and her snobbish, controlling family.

But soon it transpires that the hedonism of nearby Coney Island affords Peggy the freedom she has been yearning for, and it’s not long before she finds herself in love with a troubled pier-side artist of humble means, whom the Batternberg patriarchs would surely disapprove of.

Disapprove they may, but hidden behind their pomposity lurks a web of deceit, betrayal and deadly secrets. And as bodies begin to mount up amidst the sweltering clamour of Coney Island, it seems the powerful Batternbergs can get away with anything…even murder.

Extravagant, intoxicating and thumping with suspense, bestselling Nancy Bilyeau’s magnificent Dreamland is a story of corruption, class and dangerous obsession.

“Set in the posh hotels and alluring amusement parks of turn-of-the century Coney Island, DREAMLAND is a vibrant maze of desires, scandal, and mystery that pulls you in and doesn’t let go. A marvelous book!”
—Ellen Marie Wiseman, bestselling author of What She Left Behind and The Life She Was Given

“Outstanding thriller... Bilyeau populates her story with achingly believable, realistically flawed characters. Peggy is naive and far from perfect, but her heart is in the right place, and one can’t help feeling for her predicament. This fascinating portrait of the end of the Gilded Age deserves a wide audience.”
—Publishers Weekly STARRED review

“I could practically taste the salt-water taffy and smell the ocean air as I read Bilyeau’s latest, set in 1911 Coney Island. Beautifully written and impeccably researched, DREAMLAND is a rollicking ride.”
—Fiona Davis, national bestselling author of The Dollhouse and The Chelsea Girls

For a paperback of DREAMLAND signed by Nancy, order the book from Mysterious Bookshop.

For readers in Canada:

For readers in Australia: 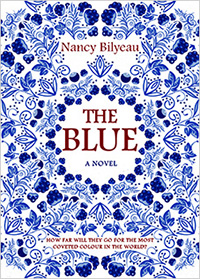 In eighteenth century London, porcelain is the most seductive of commodities; fortunes are made and lost upon it. Kings do battle with knights and knaves for possession of the finest pieces and the secrets of their manufacture.

For Genevieve Planché, an English-born descendant of Huguenot refugees, porcelain holds far less allure; she wants to be an artist, a painter of international repute, but nobody takes the idea of a female artist seriously in London. If only she could reach Venice.

When Genevieve meets the charming Sir Gabriel Courtenay, he offers her an opportunity she can’t refuse; if she learns the secrets of porcelain, he will send her to Venice. But in particular, she must learn the secrets of the colour blue…

The ensuing events take Genevieve deep into England’s emerging industrial heartlands, where not only does she learn about porcelain, but also about the art of industrial espionage.

With the heart and spirit of her Huguenot ancestors, Genevieve faces her challenges head on, but how much is she willing to suffer in pursuit and protection of the color blue?

“Transports the reader into the heart of the 18th century porcelain trade—where the price of beauty was death”
—E.M. Powell, author of the Stanton & Barling medieval mystery series

Bookstores and libraries in the U.S.: the paperback can be ordered through IngramSpark.

Bookstores and libraries in the U.K.: the paperback can be ordered through Gardners.

For readers in Canada:

For readers in Australia: 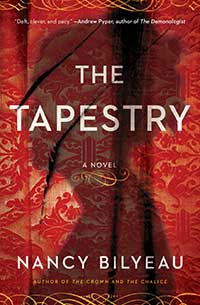 The final book in the historical trilogy. Joanna is drawn into the court of the king, becoming closer than ever to her friend Catherine Howard, tangling with Thomas Cromwell and the Duke of Norfolk—and trying to stay one step ahead of a plot against her own life.

Nun or wife, spy or subject, rebel or courtier, Joanna Stafford must finally choose her fate...

“Nancy Bilyeau's passion for history infuses her books and transports us back to the dangerous world of Tudor England. Vivid characters and gripping plots are at the heart of this wonderful trilogy, and this third book will not fail to thrill readers. Warmly recommended!”
—Alison Weir, author of The Marriage Game

“In THE TAPESTRY, Nancy Bilyeau brilliantly captures both the white-hot religious passions and the brutal politics of Tudor England. It is a rare book that does both so well.”
—Sam Thomas, author of The Midwife’s Tale 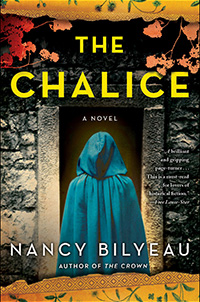 In 1538, England is in the midst of bloody power struggles between crown and cross that threaten to tear the country apart. Aristocrat-turned-novice Joanna Stafford has seen what lies inside the king's torture rooms and risks imprisonment again, when she is caught up in a shadowy international plot targeting the King. As the power plays turn vicious, Joanna understands she may have to assume her role in a prophecy foretold by three different seers, each more omniscient than the last.

"The novel is riveting, and provides fascinating insight into the lives of displaced nuns and priests during the tumultuous Tudor period. Bilyeau creates fully realized characters, with complex actions and emotions, driving the machinations of these historic personages."
—Romantic Times Book Reviews, Top Pick

"THE CHALICE is an engrossing mix of the complicated politics of the Reformation with the magical elements of the Dominican order, and Joanna—fiery, passionate, determined to honor what she thinks God wants her to do—is a fascinating character. Fans of historical mysteries, Tudor politics and supernatural fiction will all be pleased by the broad scope, quick-moving plot and historical integrity of Bilyeau's second novel."
—Shelf Awareness

International Editions of THE CHALICE: 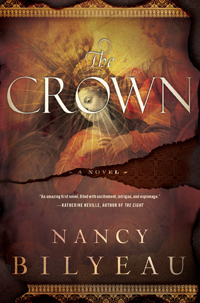 No. 1 Bestseller on Amazon!! No. 1 in Literature, Thriller, and Historical Fiction!

An aristocratic young nun must find a legendary crown in order to save her father—and preserve the Catholic faith from Cromwell’s ruthless terror. The year is 1537. . .

Joanna Stafford, a Dominican nun, learns that her favorite cousin has been condemned by Henry VIII to be burned at the stake. Defying the sacred rule of enclosure, Joanna leaves the priory to stand at her cousin’s side. Arrested for interfering with the king’s justice, Joanna, along with her father, is sent to the Tower of London.

The ruthless Stephen Gardiner, Bishop of Winchester, takes terrifying steps to force Joanna to agree to spy for him: to save her father’s life she must find an ancient relic—a crown so powerful, it may hold the ability to end the Reformation. Accompanied by two monks, Joanna returns home to Dartford Priory and searches in secret for this long-lost piece of history worn by the Saxon King Athelstan in 937 during the historic battle that first united Britain.

But Dartford Priory has become a dangerous place, and when more than one dead body is uncovered, Joanna departs with a sensitive young monk, Brother Edmund, to search elsewhere for the legendary crown. From royal castles with tapestry-filled rooms to Stonehenge to Malmesbury Abbey, the final resting place of King Athelstan, Joanna and Brother Edmund must hurry to find the crown if they want to keep Joanna’s father alive. At Malmesbury, secrets of the crown are revealed that bring to light the fates of the Black Prince, Richard the Lionhearted, and Katherine of Aragon’s first husband, Arthur. The crown’s intensity and strength are beyond the earthly realm and it must not fall into the wrong hands.

With Cromwell’s troops threatening to shutter her priory, bright and bold Joanna must now decide who she can trust with the secret of the crown so that she may save herself, her family, and her sacred way of life. This provocative story melds heart-stopping suspense with historical detail and brings to life the poignant dramas of women and men at a fascinating and critical moment in England’s past.

Check out the book trailer for THE CROWN, created by Christie and Norman LeBlanc:

International Editions of THE CROWN: